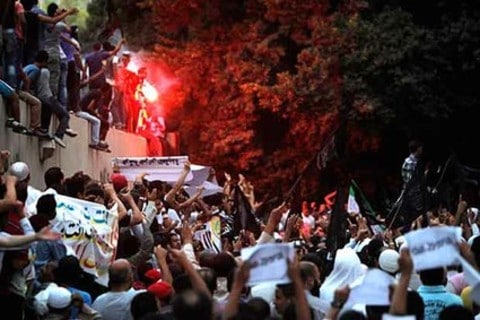 With anti-American protests still flaring around the Middle East, Secretary of State Hillary Clinton came out this morning to express her utter disappointment and revulsion with the anti-Muslim movie trailer that started it all.

The video, she said, is "disgusting and reprehensible" and she reiterated that "the United States had absolutely nothing to do with this video."

"We absolutely reject its content and message. America's commitment to religious tolerance goes back to the very beginning of our nation," she said, according to Politico. She also urged protesters to adopt non-violent methods because "[violence] has no place in religion and is no way to honor religion."

Steve Klein, a "consultant" on the film and known anti-Islam activist with ties to white supremacists, told The Guardian's Max Blumenthal, "We went into this knowing this was probably going to happen."

Though the video cannot completely be blamed for the deadly protests, it's clear Klein and his collaborator, identified as a militant Coptic Christian separatist named Nakoula Basseley Nakoula, were hoping to foment political and social unrest here and abroad.

Produced and promoted by a strange collection of rightwing Christian
evangelicals and exiled Egyptian Copts, the trailer was created with the
intention of both destabilizing post-Mubarak Egypt
and roiling the US presidential election. As a consultant for the film
named Steve Klein said: "We went into this knowing this was probably
going to happen."

Styling themselves as "counter-Jihadists", anti-Muslim crusaders like Klein took their cues from top propagandists like Pamela Geller, the blogger who once suggested that Barack Obama was the lovechild of Malcolm X, and Robert Spencer, a pseudo-academic expert on Muslim radicalization who claimed that Islam was no more than "a developed doctrine and tradition of warfare against unbelievers".

Both Geller and Spencer were labeled hate group leaders by the Southern Poverty Law Center.
…
On his personal Facebook page, Altar or Abolish, Klein obsesses over the Muslim Brotherhood, describing the organization as "a global network of Muslims attacking to convert the world's 6 billion people to Islam or kill them". Klein urges a violent response to the perceived threat of Islam in the United States, posting an image to his website depicting a middle-American family with a mock tank turret strapped to the roof of their car. "Can you direct us to the nearest mosque?" read a caption Klein added to the photo.

Blumenthal's report also confirms adult film star Tim Pax's version of events: actors were told the bare minimum about the project and essentially duped into appearing in what would become a vitriolic propaganda attack on Muslims, Islam, human dignity and good taste.