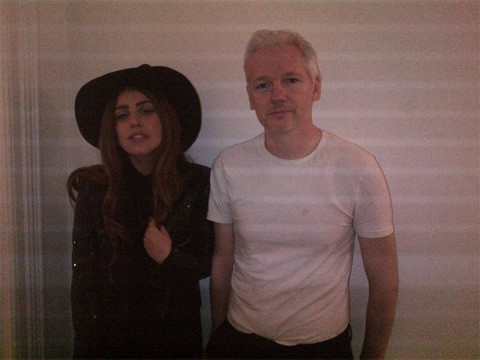 Lady Gaga posted a photo last night of herself in a pointy witches hat with Wikileaks founder Julian Assange.

They had dinner at the Ecuadorian embassy in London, the Telegraph reports:

The WikiLeaks founder, who is wanted in Sweden over alleged sex attacks on two women, has been holed up there since June and has claimed asylum.

Lady Gaga is said to have spent five hours with him, emerging at midnight after the two had shared a meal.

Earlier, singer M.I.A. had tweeted a message to Lady Gaga saying: “If ur at harrods today, come visit Assange at the Ecuador embassy across the st. im there. Ill bring TEA and CAKE (sic).”