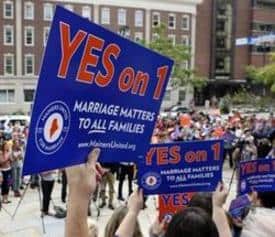 Activists and allies hoping to pass marriage equality in Maine raised massive amounts of dough in October, continuing their fundraising dominance over opponents.

According the Maine Sentinel, Mainers United For Marriage's latest FEC filings, reported last night, total $963,700 in funds raised for the month of October, $50,000 of which came from former GOP strategist Ken Mehlman. This brings their grand total up to $4.3 million.

A breakdown of some of the funds:

Now that the election is a little over the week away, the Sentinel says Mainers United for Marriage plans "switching [tactics] from persuasion to get-out-the-vote efforts, including phone
banks, mailers and contacts with the few remaining undecided voters".