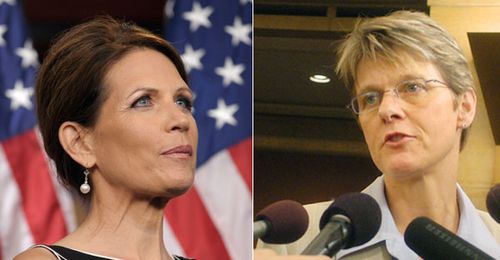 Michele Bachmann's political future looks perilous as the Minnesota U.S. Rep. faces insurgent Democratic challenger Jim Graves. Regardless of whether she wins reelection next month, Bachmann will always be known for the anti-gay initiatives she helped initiate in DC as well as her home state, where voters will also decide in November whether to pass a constitutional amendment banning marriage equality.

In a rare interview, LaFave describes to the New York Times' Frank Bruni how she and her partner of nearly 25 years, Nia, have been hurt by Bachmann's Jekyll and Hyde attitudes. On the one hand, Bachmann is always respectful of LaFave and Nia's love, but then turns around and calls homosexuality "personal enslavement."

[LaFave] couldn’t believe it when, about a decade ago, Michele began to use her position as a state senator in Minnesota to call out gays and lesbians as sick and evil and to push for an amendment to the Minnesota constitution that would prohibit same-sex marriage: precisely the kind of amendment that Minnesotans will vote on in a referendum on Election Day.

“It felt so divorced from having known me, from having known somebody who’s gay,” said Helen, a soft-spoken woman with a gentle air. “I was just stunned.”
…
[The women] never hid their relationship from their families, Nia said, though they also didn’t force long-winded discussions about homosexuality. Their philosophy, she said, was simply to “put it out there, show ’em who we are and love ’em where they’re at, and everything will fall into place.” Their goal was one of “killing them with kindness.”

They thought that was happening. At get-togethers, Nia received hugs from Michele, who traded an “I love you” with Helen, as the two always had.

LaFave, a Democrat who voted for President Obama in 2008, also describes how in 2003 she wrote a letter asking Bachmann to back off her homophobic platform. "You've taken aim at me. You've taken aim at my family," she wrote. Bachmann never responded to the letter, either in ink or in person. The divide is simply ignored, she says.