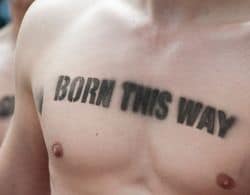 The New York Times, a paper whose editorial board once described right wing reparative therapies to "cure" homosexuality as "absurd", today has a piece about how so-called "ex-gays" are feeling ostracized and oppressed by all the work against harmful ex-gay "treatments".

According to them, they should be able to "turn straight" without fear of recrimination.

Cameron Michael Swaim, 20, said he is in the early stages of his struggle to overcome homosexual desires. Mr. Swaim is unemployed and lives with his parents in Orange County, Calif., where his father is a pastor of the Evangelical Friends Church of the Southwest.

He tried the gay life, but “it just doesn’t settle with me,” he said, and ultimately decided “there’s got to be a way to heal this affliction.”

Through weekend retreats and participation in a Southern California support group Mr. Swaim has started to explore his family relations, he said, something that has been painful but seems to be helping.

Five years from now, Mr. Swaim hopes, he will be engaged or married. In the meantime, he is trying to scrape together enough money to start seeing a reparative therapist.

Aaron Bitzer, the man suing the state of California over a ban on reparative therapy for minors, says that his own experience with innate gay feelings left him depressed and suicidal, two of the side effects doctors say reparative therapy can cause.

"If I’d known about these therapies as a teen I could have avoided a lot of depression, self-hatred and suicidal thoughts," he said. "I found that I couldn’t just say ‘I’m gay’ and live that way."