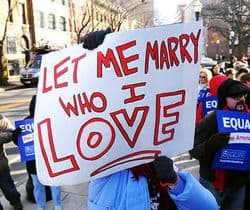 The latest Public Policy Polling survey on the marriage equality votes going down in Minnesota and Maine next week shows that most voters appear to support same-sex nuptials, but the numbers in Maine are also closer than they were in polls past.

[PPP] shows 52 percent of likely Minnesota voters oppose a proposed
constitutional amendment to recognize marriage between a man and woman
as the only valid union in the state. Forty-five percent support the
amendment. PPP's previous Minnesota survey conducted in early-October
showed a decidedly tighter race.

In Maine, a survey from in-state pollster Critical Insights released Sunday shows 55 percent of likely voters support a referendum to provide legal recognition to same-sex marriage. Opposition to the measure has jumped 7 points to 42 percent since the previous Critical Insights poll in June, while support has remained largely static.

Only a few days left, folks!