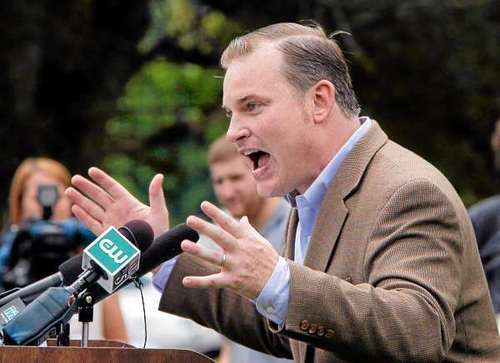 BuzzFeed's Chris Geidner spent some of his Friday doing something many of us could only dream — or nightmare — of: interviewing National Organization for Marriage president Brian Brown, arguably one of the nation's most well-connected and enthusiastic anti-gay activists.

The men covered a lot of ground during their conversation — the Supreme Court's potential decisions on marriage equality and Mitt Romney's historically homophobic policies — and though Brown feigns confidence that his hateful side will win its battles in the four states voting on equality-related measures next week, Maine, Maryland, Washington and Minnesota, it appears he's not entirely sure of himself.

BuzzFeed posed the question to him on Friday, asking what he would say on Wednesday if his cause succeeded in all four states.

“This makes clear that the people of this country know that marriage is the union of a man and a woman, and all of this talk about somehow the country turning is absolutely false, and that protecting marriage is a winning issue,” he answered, quickly adding, “If we lose one, that would still be the same.”

Then, Brown went a step further, suggesting a level of doubt that is uncharacteristic for the unflappable leader of a cause quickly losing favor among elites of both parties.

“It becomes harder if it’s two, three or four, but I don’t think that’s going to happen," he said.

His answer — and the early hedging — suggest that Brown is aware that the ground on which he is fighting is widely seen as shifting beneath his feet.

Brown was also asked about the Log Cabin Republicans, a gay GOP group that supports Mitt Romney and faithfully ignore his support for a Federal Marriage Amendment. Not surprisingly, Brown is not a fan of the organization.

Even if he and his hateful cronies do lose their electoral battles next week, Brown promised to Geidner, or maybe threatened, that NOM will never give up their discriminatory fight: "There’s no reason we can’t go back. This is never over. We’re not giving up any ground. Ever."