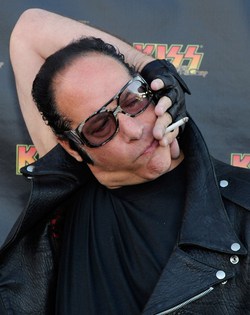 David Haglund sat down with Andrew Dice Clay to discuss the comedian’s upcoming Showtime special, his first in 17 years, and the use of the term “fag” therein.

From their conversation published at Slate:

Slate: You start the new special with your sons opening up for you, so we see Andrew Dice Clay the family man right away. But then in one of your very first riffs once you’re on stage, you give one of the guys in the front rows a hard time by saying he’s going to “catch gay.”

Slate: Because gay is too nice a word?

Clay: I get asked about that. And I say, “Why would I say gay? That’s politically correct.” But the other reason I say fag—number one, let’s just talk about the word fag. Fag is a funny word. To gays, it was insulting years ago, and I understand that because I have gay friends. But as a word onstage, for what I do as a comic, you don’t say, “You’re going to catch gay.” It’s not funny. “You’re going to catch fag” is funny.

Clay isn’t homophobic, he says, he simply wants to highlight the contradiction between right-wing arguments against equality and reality. “The reason I did the bit, honestly, is that during the presidential
race, when Romney was saying that when he’s president there will be no
gay marriages, I’m thinking, ‘Is this guy just a f*cking idiot?'” he said.

Clay went on, “The way it is today with this recession, people can’t afford to keep
their homes anymore, everybody’s losing everything, and this guy is
worried about who’s going to marry who? Whether you’re gay, straight,
you can’t tell anybody who to love and who to marry. It’s
unconstitutional and it’s morally wrong.”