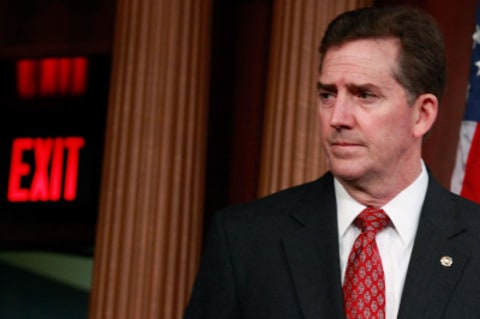 In a move that’s surprising for a career politicians but makes perfect sense for an unwavering ideologue, Republican Senator Jim DeMint of South Carolina is stepping down in January to take the helm as president of The Heritage Foundation, a conservative think tank that spends its $80 million annual budget fighting everything from raising taxes to marriage equality to giving ex-convicts the right to vote.

The Wall Street Journal reports that DeMint’s departure means that South Carolina Gov. Nikki Haley will name a successor who will then run on their own during a special 2014 election.

DeMint, a former US Rep. elected to the Senate in 2004 and reelected during the Tea Party surge of 2010, has made homophobia a hallmark of his Senate career: he has consistently said gay marriage will destroy society and even went so far as to say that gay people and single women shouldn’t be teachers, a remark he lated defended.

Previous Post: « Aussie Olympic Diver Matthew Mitcham Has Funky Trunks
Next Post: De Blasio’s Wife: Yes, I Was Once A Lesbian, But Not Anymore »