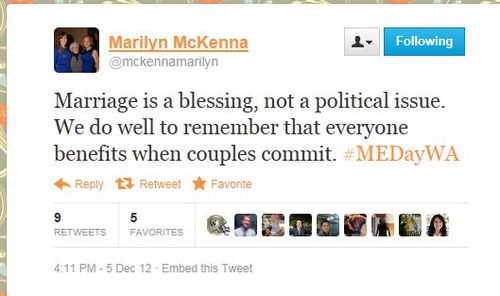 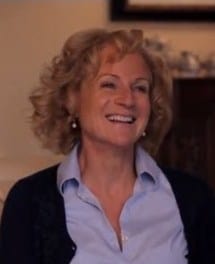 Last night, as Washington officials began distributing the state’s first marriage licenses for same-sex couples, the wouldbe first lady tweeted, “Marriage is a blessing, not a political issue. We do well to remember that everyone benefits when couples commit.”

She then wrote to Seattle PI: “I believe that being pro-gay marriage is completely consistent with being a Republican too. It’s a matter of personal choice that the government has no right to interfere in.”

And then she went even further with follow-up email: “Both the government and the Republican Party need to get the hell out of people’s bedrooms and get a life!” She seems fun!

It’s worth noting that despite his opposition to marriage equality, Attorney General McKenna, an Eagle Scout, has been working to bypass the Boy Scouts of America’s anti-gay policies.