As we've mentioned earlier on Towleroad, efforts are underway to put a marriage equality bill in front of the Illinois legislature in January, and now word comes from Lambda Legal that a new coalition has been formed, Illinois Unites, to work toward getting the bill passed. 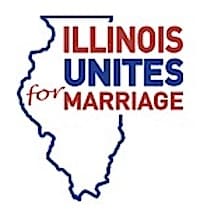 Illinois Unites brings together a diverse group of individuals and organizations from across Illinois, including business groups, labor, faith organizations, Republicans, Democrats and grassroots supporters. The coalition is being organized by Equality Illinois, Lambda Legal and the American Civil Liberties Union (ACLU) of Illinois.

The legislation, currently called HB 5170, would give gay and lesbian couples in Illinois the freedom to marry and thereby enter a life-long commitment of responsibility and respect.  Recent polling indicates that a majority in Illinois supports giving same-sex couples the freedom to marry. Meanwhile, national polls as well as the November elections confirm that the American people have turned a corner on the issue.

The three founding organizations of Illinois Unites for Marriage believe
that the government should have a statewide policy treating all
Illinoisans with dignity and respect. The coalition is working closely
with the bill’s lead sponsors, Representative Greg Harris (D-Chicago)
and Senator Heather Steans (D-Chicago), who announced last week they
would seek a January vote on the measure.

The Illinois marriage
bill respects religious freedom. Every church and religious group will
make its own decisions about whether to allow same-sex couples to marry
in their faith. Faiths that do not want to embrace same-sex marriage
will not have to.

The three founding organizations of Illinois
Unites for Marriage believe that all Illinoisans deserve a statewide
policy of fairness, dignity and equal treatment.  Nine states plus the
District of Columbia have already given same-sex couples the freedom to
marry: Iowa, Washington, New York, Massachusetts, Vermont, Maine,
Connecticut, New Hampshire and Maryland.

Said Jim Bennett, Regional Director of Lambda
Legal. “The momentum is undeniable – allowing same-sex couples to marry is the
right thing for Illinois. It’s best for our state that our government treat all families
with equity and respect. Nine other states now have full marriage
equality. It’s time for Illinois to act.”

Added Bernard Cherkasov, CEO of Equality Illinois, the state's oldest and
largest LGBT advocacy organization: "We are uniting to urge
members of the Illinois General Assembly to let all Illinoisans express
their love and life-long commitment through civil marriage."