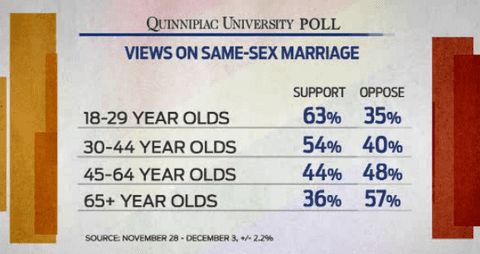 The crew from MSNBC’s The Cycle spent some time yesterday afternoon discussing a new Quinnipiac University poll that shows significant shifts in support for same-sex marriage among demographics once vehemently opposed, including men and White Catholics, the latter of whom now support equality 49-43.

From the poll’s press release:

Voters today are divided 48 – 46 percent on the issue of same-sex marriage, reversing the55 – 36 percent opposition to same-sex marriage in a July, 2008, survey by the independentQuinnipiac (KWIN-uh-pe-ack) University. White Catholics support it 49 – 43 percent

“It seems pretty clear that attitudes toward same-sex marriage in American society arechanging rapidly. While the country remains split on the issue, supporters have come pretty farin the last four years,” said [Peter A. Brown, assistant director of the Quinnipiac University Polling Institute]. “Since voters 18 to 29 years old support same-sex marriage63 – 35 percent, once again we see it’s just a matter of time.”

Can the GOP bring these youngsters into their increasingly stodgy fold? Will the GOP finally embrace equality, or pick a less inflammatory social issue, like marijuana legalization? And where do the Evangelicals fit into all of this?

The Cycle hosts attempt to answer these questions and more AFTER THE JUMP.