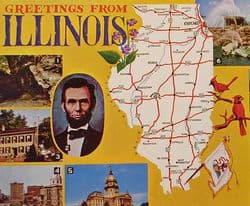 The latest Public Policy Polling survey shows more Illinois voters favor marriage equality than those who oppose, 47% versus 42%, and that activists there should focus on convincing white voters to side with equality.

From the Windy City Times:

The majority of white voters did not
support same-sex marriage in Illinois with 40 percent supporting and 51
percent opposing.

Those numbers could be good news for LGBT advocates as many believe
Illinois is on the cusp of achieving marriage equality. Two lawsuits
filed in Cook County seek to overturn the ban on same-sex marriage in
Illinois, and pro-gay lawmakers have stated that a vote on a marriage
equality bill could be just around the corner.

Rick Garcia, who has been instrumental in the passage of pro-LGBT
policy in Illinois, predicted that marriage equality in the state would
come "sooner rather than later."

If the Supreme Court rules in favor of equality, though, that moment will be even sooner than imagined.