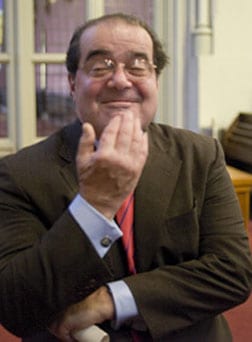 In case you missed it yesterday, Amy Davidson at The New Yorker offered her thoughts on how Supreme Court Justice Antonin Scalia’s clear “animus” toward marriage equality, as seen in his stubborn and indulgent commitment to a comparison of same-sex love and bestiality, completely undercuts his pursuit of political theater:

A few months from now, when the Supreme Court hears arguments in the two
same-sex marriage cases it accepted for review last Friday, many
observers will likely be in [Princeton Student Duncan] Hosie’s position—listening with some
amazement to Scalia as he berates lawyers, fascinated by his animosity,
wondering about the point where a cruel note removes any enjoyment one
might find in intellectual theatrics.

There haven’t exactly been signs
that Scalia is mellowing. His dissent, this year, in an Arizona
immigration-law case, was as politicized and angry as ever—and
gay-rights cases do not exactly bring out his soft side. For the
health-care case, we had broccoli arguments; for same-sex marriage, we
will likely be coming back to bestiality.

The Los Angeles Times‘ editorial board also took on Scalia today, writing, “But the reality — and perhaps this is what so dismayed Hosie — is that
the Scalia opinions in question bristle with hostility toward
homosexuality and homosexuals.”

They went on: “Hosie wondered why Scalia couldn’t make his points without offensive implications about gays and the lives they live. But what if those slurs were the point? That’s a depressing possibility to contemplate as Scalia and his colleagues prepare to rule on cases involving same-sex marriage.”