Those of us who believe in reasonable limitations on an individual's ability to get his or her hands on weapons of war have to accept the fact that the Second Amendment exists. The Framers thought it was so important that they put it right up there at the top, second only to some of the most basic freedoms in our republic: speech, press, religion, and association. But, there is nothing in the Second Amendment inconsistent with reasonable restrictions on guns. 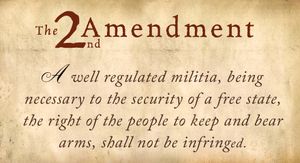 No rights are absolute, despite what some of our distinguished judges think. Rights are just one part of a grand social bargain that includes attendant personal responsibilities, obligations to others, greater societal goals, and expectations of stability and freedom. But that doesn't mean that we can ignore the constitutional manifestation of a long-standing tradition for some segments of the American population. The Second Amendment has to be reckoned with, and not with emotion or the understandable shock, horror, and disbelief we feel after tragedies like Newtown.

The Second Amendment states as follows:

A well regulated Militia, being necessary to the security of a free State, the right of the people to keep and bear Arms, shall not be infringed. 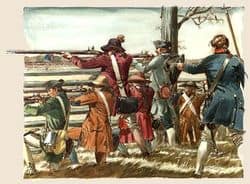 Let's set aside the ongoing debate about the commas for now. The governing interpretation of that language considers the first clause — "A well regulated militia" — prefatory or introductory. It doesn't provide context. Nor does it limit the third clause — "the right of the people to keep and bear arms." It merely gives us a purpose for protecting the right to bear arms. And, because militias consisted of armed citizens, because the British had made a point of trying to disarm the American colonists, and because the Anti-Federalists were concerned that the new central government was going to do the same, the notion of a "militia" was entirely bound up with everyday individuals having guns. The second clause — "being necessary to the security of a free State" — modifies the first. It explains the explanation. So, given that, let's rewrite this confusing provision into something we can understand:

Because we think citizens having access to arms is essential for democracy and security, the people's right to bear arms will not be infringed.

Even if we accept that this is best interpretation of the language and history of the Second Amendment (I think it's barely north of plausible), this reading does not require absolutism. It doesn't ban all restrictions on guns.

Let's discuss what the Second Amendment actually says. Then we can try to prevent the next Newtown.

The question is whether this dependent clause is simply prefatory — like saying, "Hey, I'm about to tell you something…" — or definitionally important — like saying, "Only when x=5+9 is the following equation true…".

A recent Supreme Court decision striking down a handgun ban stated that the language was merely prefatory, that it did not limit the right to bear arms, and that because many Americans accept the use of handguns for self-defense purposes, a total ban on such commonly used arms violated the Second Amendment.

I disagree with this reasoning for several reasons.

First, arguing that the language is really prefatory and does nothing more than state a general purpose of the following clause requires us to ignore the long standing interpretive rule that there are no throwaway words in the Constitution.

Second, even if the language is prefatory, that does not speak to the arguable contingent historic nature of the right to bear arms. Guns used to play an important role in protecting American democracy, but they are more than likely playing a different role in American today than in the 1780s.

Third, prefatory language still provides context to the language that follows and, therefore, explains the nature of the right to bear arms.

For the moment, though, we have to accept the prefatory status of the first clauses. Even then, there are several avenues open to those who wish to reinstate some reasonable regulations on guns. The Supreme Court cabined its grant of a general right to bear arms as against a total ban on handguns. Handguns, unlike assault weapons, are among those guns that the Court found were common in America and among those guns many people accepted as helpful for self-defense. The same — commonality and generally accepted for self-defense — cannot be said for assault weapons. Nor can it be said for any weapon that allows rapid fire, like the weapon of war used in Newtown and previously subject to an assault weapons ban.

There is also nothing in the Second Amendment that makes sense out of the "more guns are the answer" argument. Just because there is a right to something doesn't mean that the right is necessarily enjoyed responsibly or should be invoked commonly in civil society. All rights have attendant responsibilities and limits. And, just because the Framers of the Constitution thought that generally available guns would make society more free or more stable, does not mean that is necessarily true.

In fact, the exact opposite is true. An armed society is not a free society. It is one that is supposed to discourage bad behavior not by creating good citizens, but by putting the fear of death into everyone around. An armed society takes away the government's monopoly on punishment and elevates fear to a governing principle of stability and order. Perhaps Machiavelli would be proud, but it would shroud modern American democracy under a dark cloud of suspicion, conformity, and hostility.

What Can we Do?

We need leadership, and leadership is slowly (too slowly and too late) being provided. Senators Dianne Feinstein and Chuck Schumer are introducing assault weapon bans and other gun regulation measures once the next Congress convenes in January. President Obama is slowly coming around to regulation, but his focus is elsewhere at the moment. Mayor Mike Bloomberg is using his considerably large wallet, loud bully pulpit, and lack of anything to lose to advocate the step-by-step regulatory method to eliminating gun violence. Together, they want to…

– Reinstate the assault weapons ban that expired in 2004

– Limit the sale of large ammunition clips to make sure that the guns that are available are appropriate for hunting, not firing 20 rounds in 5 seconds

– Close the gun show loophole and require background checks for all gun purchases, not just those that happen at a brick-and-mortar gun store

These are first steps and they all require leadership. President Obama may be in the best position to help stop the next mass shooting tragedy. Let us hope that the impossibly awful Newtown massacre galvanizes the political classes into action.