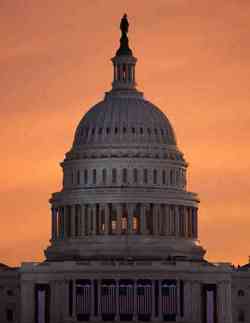 With the new Congress settling in, Jeremy Peters of the New York Times today discusses how gay and lesbian lawmakers are slowly emerging from the shadows, an illustration of society's own evolution. But things are far from perfect.

Congress has never been an accurate reflection of the country it serves. It remains far whiter, wealthier and more male than the nation’s population. But as their numbers in Congress gradually increase, there is a sense among these newcomers that they are forcing some of their colleagues to rethink gay rights and homosexuality.

The presence of openly gay men and women and their families was a factor that many believe was decisive in turning the tide for states where same-sex marriage was legalized by legislatures. Seeing them helped put a human face on a concept that many legislators had thought about only in the abstract.

Yet even with the opportunities gay men, lesbians and bisexuals say their membership in Congress presents, their reception has not been a completely warm one. One of the first acts of the Republican-controlled House was to set aside funds to defend the 1996 law that prohibits the recognition of same-sex marriages because the Obama administration has stopped supporting it. And not everyone seems completely comfortable with their presence, like members of a Christian prayer group who seemed taken aback at a recent Congressional retreat when one noted he was married to a man. But in some ways the most telling sign of the gay lawmakers' advancement in Congress is the fact that their presence is now a little more routine.

The fact of the matter, though, is that gay and lesbian lawmakers are still a little over 1 percent of Congress, and the bulk of the GOP-controlled House remain obstinate on equality. Only 184 members have come out for LGBT rights, according to HRC; 220, a majority, are opposed.