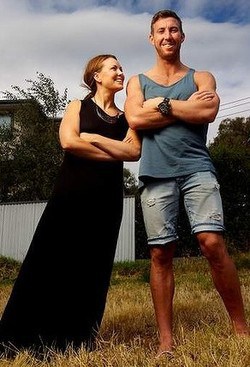 Australian rules footballer Brock McLean is a prime example of the power of coming out.

In a new interview with The Age, McLean explains how his sister Ellie’s honesty about her sexuality tuned his own ear to homophobia, particularly among his fellow athletes, and inspired him to speak out against hate.

“The AFL needs to adopt a total zero-tolerance policy,” he says. “AFL players who do [yell homophobic taunts] should be made an example of, fined and suspended. We need to say this isn’t acceptable and set an example not just for the football community but for the rest of the community.”

McLean, who plays for the Carlton Football Club, says that while a few other players, like Jason Ball, are speaking out for LGBT fans, the AFL as a whole needs to step it up.

“The AFL’s the biggest sport in Australia,” he said. “They’re in a powerful position to promote equality and treating everyone the same regardless of whether they’re gay or straight. They’re dipping their toe in with this issue but really they need to put their whole body in.”

Ultimately, says McLean, the biggest step would be for an actual player to come out, though he doesn’t expect to see that happen anytime soon. “There’s still that fear of being an outcast,” he told The Age. “I saw that with my sister and that’s really sad because people shouldn’t have to live with a secret as big as that. That silence can have a huge effect on them mentally.”

And McLean’s sister’s experience shows that homophobia doesn’t only impact the players, but their families. Her own coming out experience was complicated by fear for her brother on the field, “Guys are always paying out on each other on the footy field and I didn’t want him to be embarrassed or cop any abuse.”

While we wait to see what kind of an impact the McLean siblings’ comments have, Jill Stark, senior writer at Sunday Age, uses this moment to discuss her experience with players who refused to speak out against homophobia… AFTER THE JUMP.

Previous Post: « Towleroad Talking Points: Damon vs. Kimmel
Next Post: A New Day Dawns In Congress, Though Not Bright Enough »