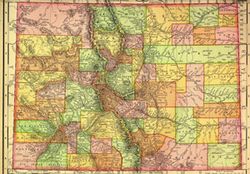 She filed the proposal Monday with the nonpartisan Legislative Council, the first of many steps in getting an issue on the ballot .

"I do personally support gay marriage, but my parents don't," Mandelski said, "but they are supporting me in this because they do think the issue should be voted on."

Colorado voters in 2006 approved a constitutional amendment that basically outlawed same-sex couples from marrying. It passed approved 55 percent to 45 percent.

The first hearing on the proposal is scheduled for February 11.