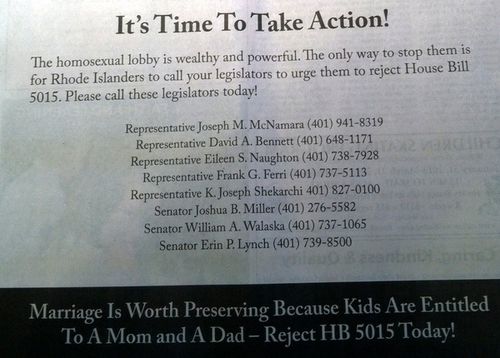 The Rhode Island House Judiciary Committee last night set the date for a vote on that state's marriage equality bill: next Tuesday. With passage looking more likely, the panicked anti-gay activists at NOM are pulling a familiar, desperate trick: placing a full-page, lie-filled ad in the local newspaper.

Luckily, the recently launched coalition Rhode Islanders United For Marriage was ready to strike down their claims in a lengthy press release. Here are two examples:

•    Claim: Marriage equality legislation will force schools to change curricula. For example, opponents of marriage equality have said, "In Massachusetts, children as young as second grade have been taught about homosexual marriage in class."

•    Fact: Minnesota Public Radio has called this claim misleading: "There's no evidence that same-sex marriage is taught throughout Massachusetts, and the state doesn't require such curriculum." The claim was also previously debunked by PolitiFact Rhode Island, which rated it "false."

•    Fact: A Seattle Times investigation "failed to turn up any evidence that same-sex marriage had produced a rash of suits involving businesspeople." The Times "also checked with human rights commissions in four of the six states where marriage is legal; the commissions said there was not an increase in discrimination findings or suits involving same sex marriage."

Check out the main text of their ad, via Joe.My.God, AFTER THE JUMP. 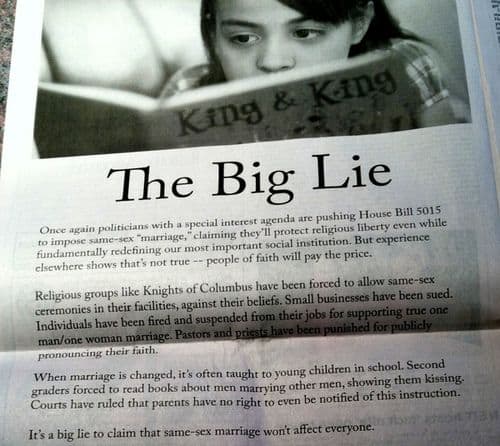