A new poll shows that more Catholic voters support same-sex marriage than ever before: 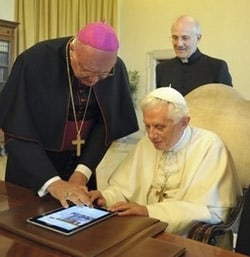 American voter support for same-sex marriage is inching up and now stands at 47 – 43 percent, including 54 – 38 percent among Catholic voters, according to a Quinnipiac University poll released today.

This compares to a 48 – 46 percent statistical tie among all voters on same-sex marriage December 5 and reverses the 55 – 36 percent opposition in a July, 2008, survey by the independent Quinnipiac University.

Said Peter A. Brown, assistant director of the Quinnipiac
University Polling Institute: "Catholic voters are leading American voters toward support for same-sex
marriage. Among all voters, there is almost no
gender gap, but a big age gap. Voters 18 to 34 years old support same
sex marriage 62 – 30 percent; voters 35 to 54 years old are divided 48 –
45 percent and voters over 55 are opposed 50 – 39 percent."

Catholics don't much like the direction the Church or the former Pope has been moving in either:

Among all adult Catholics, 52 percent say the Church is moving in the right direction, while 31 percent say it is going in the wrong direction.  Church leaders are out of touch with the views of Catholics in America today, all Catholics say 52 – 40 percent. Men say out of touch, 54 – 37 percent, while women agree by a smaller 49 – 43 percent margin.

The next pope should move the Church in new directions, 55 percent of Catholics say, while 38 percent say the pope should maintain the current direction.

American Catholics say 62 – 30 percent that the next pope should allow priests to marry and say 64 – 28 percent, including 68 – 24 percent among women, that he should relax the church ban on contraception.

Under the next pope, Catholics say 81 – 13 percent, the Church should do more to combat sexual abuse of young people by priests.

Added Brown: "Looking at all adult Catholics, different from the wider survey of all
registered voters, we see a conflicted group: a slim majority say the
Church is moving in the right direction while slim majorities say Church
leaders are out of touch with their views and the next pope should
change directions."