Cyndi Lauper, whose new musical Kinky Boots is set to open on Broadway next month, talks to Next magazine about its development, and also her True Colors Fund, which advocates on behalf of LGBT homeless youth. 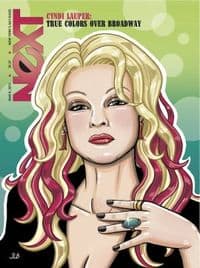 She also takes a shot at her former Apprentice "boss" Donald Trump:

"I’m not going to kiss ass with somebody like that…I felt that what he said about the gay community was disappointing because a lot of gay people work for him. It’s just sad. I thought he could have done better for his country than just go to the lowest common denominator and stir up the crap. It’s our country, it’s not wrestling. If you try and make our president fail, it doesn’t matter who he is, you make our country fail. And if you really are a patriot, if you really give a sh*t about our country, you don’t do stuff like that. First of all, you’re an entertainer, and you make ugly buildings, and you’re famous for it. And you have a reality show with very high ratings. Don’t step into the forum like that. Become educated with facts. Don’t just be a sh*t-stirrer. Our country is in trouble and he keeps wanting to make [Obama] fail. Let’s call a spade a spade. The guy’s a black man and that’s your issue? What kind of idiot are you? Come on.”