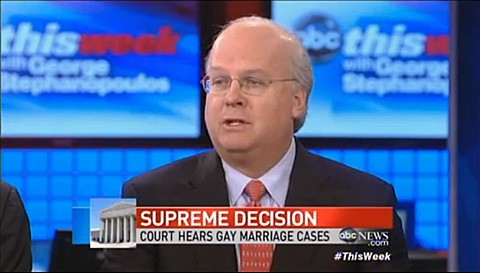 Mediaite clipped this moment from a discussion on ABC News' This Week this morning.

“Karl Rove, can you imagine the next presidential campaign a Republican candidate saying flat out ‘I am for gay marriage,’” asked Stephanopoulos.

“I could,” said Rove, before turning the discussion back to the Supreme Court’s hearing on the issue.

Rove of course, was key to making same-sex marriage a wedge issue in the 2004 election by placing several measures to ban it on the ballot in key swing states.

More on this roundtable, if and when it becomes available.

Previous Post: « Atty General Kamala Harris: ‘50,000 Children in California…are Asking, Why Can’t My Parents Be Married Too?’ – VIDEO
Next Post: Evan Wolfson Schools Tony Perkins on ‘Face the Nation’: ‘Gay People are not Going to Use Up the Marriage Licenses’ — VIDEO »