Senator Mark Begich (D-AK) became the third Democratic senator in two days to come out in support of marriage equality last night after issuing a statement to Buzzfeed. 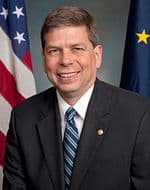 "Gay and lesbian couples should not be denied the ability to pledge their love and commitment through the civil institution of marriage. I believe that two committed adults of the same sex should be able to receive a government-issued marriage license, while religious institutions retain their right to determine which marriages they will perform."

Begich has never stated whether he was for or against same-sex marriage directly but opposed a federal marriage amendment and supported same-sex partner benefits. He did not join a recent amicus brief in the DOMA case urging the court to strike it down.