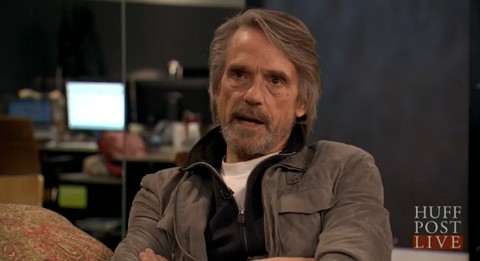 "Could a father not marry his son?" Irons asked HuffPost Live host Josh Zepps. Irons argued that "it's not incest between men" because "incest is there to protect us from inbreeding, but men don't breed," and wondered whether same-sex marriage might allow fathers to pass on their estates to their sons without being taxed.

"It seems to me that now they're fighting for the name," Irons said of advocates for same-sex marriage as opposed to civil unions. "I worry that it means somehow we debase, or we change, what marriage is. I just worry about that."

Irons added that he wishes "everybody who's living with one other person the best of luck in the world."

Previous Post: « Towleroad Guide to the Tube #1339
Next Post: Gambian President Threatens Gays: ‘If We Catch You, You Will Regret Why You Are Born’ »