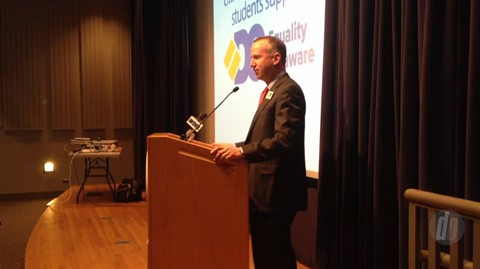 Delaware Governor Jack Markell will sign a marriage equality bill if one comes across his desk, he told students at the University of Delaware yesterday.

And a bill is beginning its journey this week, according to the News Journal:

“It can happen here in Delaware and it can happen this year,” Markell told the audience tonight. “But it will only happen if you do your part to make it happen.”

The gathering at the University Of Delaware Trabant center this afternoon was a rallying call to get students and others energized about the push to make Delaware the 10th state to legalize same-sex marriage.

A bill to legalize same-sex marriage in Delaware is expected to be pre-filed in the Delaware House of Representatives on Thursday, before lawmakers return to Dover next week. Rep. Melanie George Smith, a Bear Democrat, is expected to sponsor the bill, shepherding the marriage proposal through the General Assembly. Smith sponsored a 2011 bill allowing same-sex civil unions in Delaware.