Rep. Louie Gohmert (R-TX), perhaps the House's loudest, nuttiest bigot, isn't letting that title get away from him. 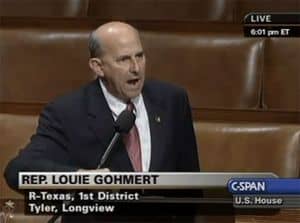 Here's what he said when asked about his opposition to gun control legislation, Right Wing Watch reports:

In fact, I had this discussion with some wonderful, caring Democrats earlier this week on the issue of, well, they said "surely you could agree to limit the number of rounds in a magazine, couldn't you? How would that be problematic?"

And I pointed out, well, once you make it ten, then why would you draw the line at ten? What's wrong with nine? Or eleven? And the problem is once you draw that limit ; it's kind of like marriage when you say it's not a man and a woman any more, then why not have three men and one woman, or four women and one man, or why not somebody has a love for an animal?

There is no clear place to draw the line once you eliminate the traditional marriage and it's the same once you start putting limits on what guns can be used, then it's just really easy to have laws that make them all illegal.

Earlier in the discussion, Gohmert called on Christians to take a more active role in politics … because otherwise their churches are going to be forced to hire cross-dressing Satan-worshipers.

Right Wing Watch has the audio if you're interested in listening.