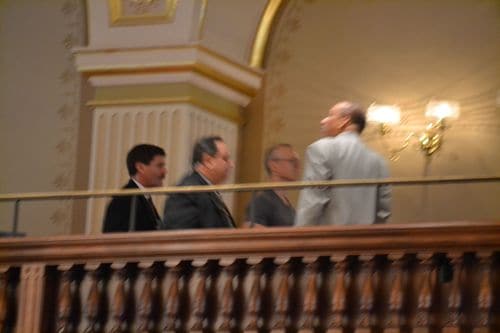 With just two days left in the session, lawmakers are under tremendous pressure to pass the marriage equality bill pending in the Illinois House.

The Windy City Times reports that "LGBT activists, advocates and community members have begun filtering into the capitol" in anticipation of a vote, possibly this afternoon:

Chief sponsor Greg Harris (pictured) has said he will "absolutely" call for a vote on the bill by session's end May 31. He has also stated that the bill will pass.

Multiple sources connected with organizing efforts around the bill have stated that a vote is expected this afternoon, evening or early in the day on Friday. That timeline will partially depend on other business in Springfield as spring session wraps up.

Advocates with Equality Illinois, Lambda Legal, the American Civil Liberties Union of Illinois, The Civil Rights Agenda, Human Rights Campaign, Gay Liberation Network and other groups are already in the capitol. Sources say that the families of some reps. are also headed for Springfield.

The Illinois Observer added, in an article published this morning:

"A top Democrat told The Illinois Observer on Wednesday night, 'The roll call is in the high 50s. It’s close; it’s almost there.' The magic number to pass the House is 60."

The Chicago Phoenix reports on its Facebook page that there is increased activity in the House chamber, including the removal of activist Andy Thayer (top), for reportedly "draping rainbow flags from gallery seating."

UPDATE: The Windy City Times tweets that the House has now gone into recess until 4 pm CT, but the vote could still happen this evening.