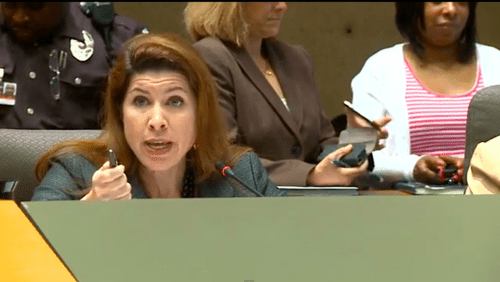 At a Wednesday morning Dallas city council meeting, outgoing Councilwoman Angela Hunt expressed her disappointment over the city's failed marriage equality resolution and made an impassioned speech for gay rights moving forward. Dozens of LGBT rights supporters showed up at the meeting as well to vent their frustration over the resolution, which died after mayor Mike Rawlings and other council members balked on a council vote.

Hunt is leaving the council because of term limits, and says she regrets not being able to vote "yes" on the resolution. Fortunately, the two candidates vying to replace Hunt were seated with the LGBT speakers in the audience in a show of support.

Scott Briggs, the council member who originally offered the marriage equality resolution, predicts it will pass once it makes it onto the council's voting agenda. That all depends, however, on preventing candidates like this from taking office.

Watch the speech, AFTER THE JUMP…

Previous Post: « This Week In Unnecessary Censorship: VIDEO
Next Post: Forest Whitaker Serves The Presidents in ‘The Butler’: VIDEO »