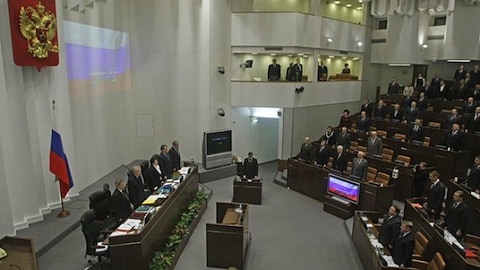 As we celebrate the death of DOMA and the rejection of Proposition 8 by the US Supreme Court this week, it is important to remember that the fight for equality is facing setbacks in other parts of the world. RT reports that Russia's Federation House approved a bill that would fine anyone disseminating "gay propaganda," with harsher fines going to anyone who uses the internet or media to do so, and foreigners face a 15-day jail sentence followed by deportation. The bill was approved in a landslide vote of 137-0 with one senator abstaining.

Federation Council speaker Valentina Matvienko spoke before the vote, using the all-too-familiar tactic of hiding bigotry behind the welfare of children:

"[Gays and lesbians] are ordinary equal members of the society. As adults, they are entitled to decide how they want to live. But when it comes to minors [the ban on propaganda] is not someone’s whim, but a demand from the society."

Russian society is 88% in favor of the ban according to a poll by the Russian Public Opinion Research Center (VCIOM), showing that it's not just politicians who have a long way to go in terms of treating gays and lesbians like full citizens and human beings.

The bill has been condemned by Russian and foreign gay rights activists, but President Putin, who has yet to sign the bill into law, claims without a trace of irony that the bill does not impose sanctions on nor violates the rights of sexual minorities. He, too, chose to hide behind children, stating:

“Some countries … think that there is no need to protect children from this. We Do.”