Indiana Governor Mike Pence issued an apology on his official Facebook page today after accusations that he and/or his staffers had deleted pro-equality comments from the same page following the Supreme Court decision this week. 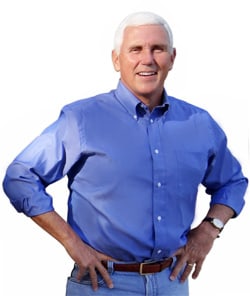 The commenters were responding to the posting Wednesday of Pence’s statement expressing his renewed support for putting a proposed state constitutional ban on gay marriage before Indiana voters in 2014. Some said they believe their comments were deleted simply because they opposed the governor’s position, not because they were disrespectful.

Pence said on Thursday that the comments were being deleted because they were "uncivil" but today Pence admits the truth.

"I believe that civility and respect for the opinion of others is essential to the democratic process. I also believe in the Freedom of Speech. Over the past 24 hours, I became aware of concerns that comments responding to my statement of support for traditional marriage were being deleted from this Facebook page because they disagreed with my stated position.

Our longstanding policy, on this and other social media sites, has been to delete inflammatory comments that include name-calling, vulgarity or comments personally insulting to others. It was my understanding that the comments which were deleted all met this standard.

On careful review, it appear that this was not always the case and some comments were being deleted simply because they expressed disagreement with my position. I regret that this occurred and sincerely apologize to all those who were affected.

I have instructed our staff to review our policy and develop a standard of conduct similar to that of other elected officials and news organizations in the days ahead. We will post that policy prominently on this site. Hoosiers expect our public debate to be open and respectful and we will ever seek to live up to that standard. In agreement or disagreement, I respect the opinions and the freedoms of all the people of Indiana."

The censorship was being documented by an online site called Pencership.