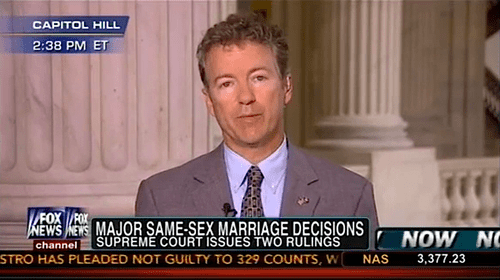 During a radio interview with Senator Rand Paul on Wednesday, Glenn Beck revealed that he was "very concerned" that the DOMA and Prop 8 rulings may one day lead to legalized polygamy for the country. Paul, on the other hand, had more pressing worries on his mind because "if we have no laws on this, people take it to one extension further – does it have to be humans?"

Shortly after the interview, however, Paul appeared on Fox News and attempted to distanced himself from the 'flak,' saying that he doesn't really believe gay marriage will lead to legalized polygamy or non-human marriage. Mediate reports:

"I don't think we're going on towards polygamy or things beyond that," Paul continued, "but I do think that our country is divided on the issue and that in some ways, the Supreme Court decision is probably going to allow us to agree to disagree. He predicted that while some states like New York may move forward with gay marriage in the short term, others in the south will not for the "foreseeable future."

Paul's congressional office also tried to downplay the comments, saying they were only 'sarcasm':

"Sarcasm sometimes doesn't translate adequately from radio conversation," his communications director Moira Bagley said. "Sen. Paul did not suggest that striking down DOMA could lead to unusual marriage arrangements. What he was discussing was that having the state recognize marriage without definition could lead to marriages with no basis in reality."

See? He was just misunderstood. Glad everything is cleared up now.

Check out the original audio clip and his Fox News interview, AFTER THE JUMP…