Renew America, a right-wing group that has previously published articles pondering whether gay marriage will bring about the Anti-Christ, reacted to the recent Supreme Court marriage equality victories by asking which states should begin seceding from the union. 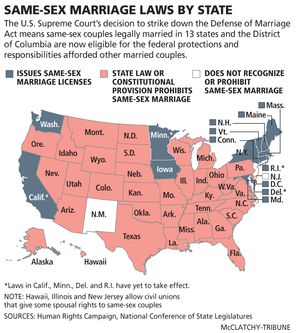 June 26, 2013, is the beginning of the end for the United States of America. Christians, conservatives, and liberals to a small degree, who believe in the Judeo-Christian values of our forefathers will find them boxed in by the government police… From my perspective, for us to follow the laws handed down by God, we have only one option and that is to secede from the union…

The big question is, what state or states would secede from the union? My belief is if just one state would secede others would shortly follow because things will only get worse. If a new nation is formed under the Laws given down by God and the values passed down by our forefathers, this new nation will be blessed. The new nation can take the constitution as handed down by our forefathers since America is in the process of abandoning it.

Craft's rhetoric also follows a trend of right-wing calls to war over the legalization of gay marriage: last week, the so-called American Decency Association called the rulings "as bad as Pearl Harbor" and several prominent conservative leaders signed a pledge urging citizens to defy the court ruling. Last year, Tony Perkins of the Family Research Council said legalizing gay marriage would lead to revolution and several years back, National Organization for Marriage board member Orson Scott Card wrote an essay calling for Americans to rise up and destroy any government that attempts to redefine marriage.

For those of you interested in what the United Gaytes of America will look like after all the non-marriage states secede, click on the image above. (Image via McClatchy-Tribune)

Previous Post: « Following SCOTUS Ruling, VP Biden Says America ‘On The Road To Fairness’: AUDIO
Next Post: Check Out These Stunning Interactive Maps of the State of HIV/AIDS in America »