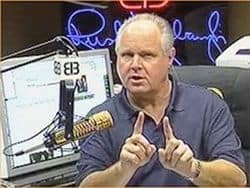 Rush Limbaugh took time out of his radio program yesterday to tear into supporters of same-sex marriage and praise the dissenting arguments presented by Justice Scalia in the DOMA case. Mediaite reports:

Limbaugh read Supreme Court Justice Antonin Scalia's dissent in the case against the Defense of Marriage Act and praised him for identifying insults in the majority opinion directed at DOMA supporters. "It proves that we are up against people who don't give a damn about the rule of law, or about decency, or about decorum," he said.

He goes on to complain about how the "left is intolerant and fully invested in the low art of personal destruction through smear tactics," which is ironic considering Limbaugh's body of work.