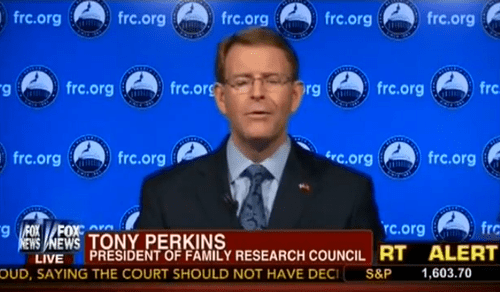 Because you simply all wanted to know what Tony Perkins's thoughts were on the same-sex marriage ruling, here are some gems from his appearance on Megyn Kelly's Fox News program:

On being on the right side of history:

I don't think time is on the side of those who want to redefine marriage, because those ramifications, the loss of religious freedom, where you have bakers and florists and photographers forced to participate in same-sex marriages. When the American public begins to see that, the loss of parental rights, as children are taught values that are inconsistent with what they're taught at home. And you see churches and religious organizations lose their tax-exempt status, I think Americans are going to pause and say 'this is not what I gave a nod of affirmation to'.

On what can be done now:

There's still room in this opinion for the federal government, I think, as we're looking through this for federal purposes, only as it pertains to immigration and maybe in the military to define marriage as the union of a man and a woman. So this is far from over.

At this point the other interviewee, Richard Socarides, interrupts him saying, "Well that is absolutely not true. President Obama has already issued a statement since the ruling which said very clearly that he's going to act swiftly and promptly to implement this decision."

Partway through Socarides's explanation, Perkins interrupts him with heavy sarcasm, "Oh, I believe everything that he says."