The U.S. Department of Housing and Urban Development (HUD) released the results of the first ever study on same-sex housing discrimination today. They are unsettling to say the least: 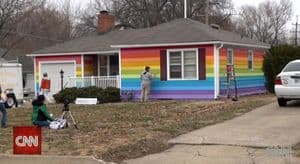 The study, An Estimate of Housing Discrimination Against Same-Sex Couples, measures the treatment same-sex couples receive from rental agents when inquiring about apartments advertised online, as compared to how otherwise similar heterosexual couples are treated.

HUD remains committed to providing equal access to housing for all individuals under United States law. Though The Fair Housing Act does not include sexual orientation or gender identity under its umbrella of identified protectorates, twenty states, along with the District of Columbia, have laws reinforcing the protected status of LGBT individuals.

Prior to the housing discrimination study, HUD already recognized the need for such protections to extend across the country.

Recently, HUD issued new guidance that treats discrimination based on gender nonconformity or sex stereotyping as sex discrimination under the Fair Housing Act, and instructs HUD staff to inform individuals filing complaints about state and local agencies that have LGBT-inclusive nondiscrimination laws. In addition, on February 3, 2012, HUD published a final rule, “Equal Access to Housing in HUD Programs Regardless of Sexual Orientation or Gender Identity”, which requires HUD-funded and HUD-insured housing providers and FHA-approved lenders to provide equal access without regard to sexual orientation, gender identity, and marital status.

What this study's results, and the steps already taken will mean for same-sex couples in the housing market remains to be seen.