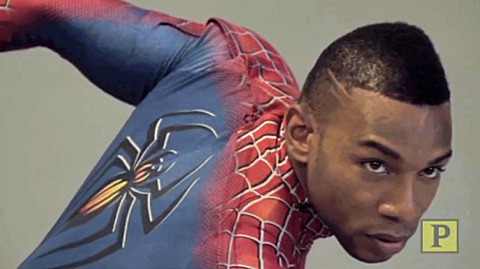 When Andrew Garfield recently posed the question: "Why can't Spider-Man be gay?", he was no doubt unfamiliar with Julius Carter, a young man living out this very fantasy in real life.

Once persecuted for his sexuality, Julius is now one of seven Spider-Man stuntmen for the blockbuster musical "Spider-man: Turn Off the Dark." But for Julius, swinging 30 feet above a Broadway stage at 30 miles an hour in a Spider-Man costume is not the most impressive or awe-inspiring part of his life, it's the journey he's made as a gay man overcoming adversity.

Julius' amazing story began the day of his Iowa high school graduation, when he was confronted by a villain that would have made even the Green Goblin envious.

Continue, AFTER THE JUMP…

From The Des Moines Register:

The Rev. Fred Phelps, renowned for his virulent demonization of gay people, had come from Topeka, Kan., to picket Julius' graduation with a band of Wesboro Baptist Church followers. That's because Julius was getting a Matthew Shepard scholarship, awarded annually by the Eychaner Foundation to three openly gay students.

At the time, Julius was also dealing with rejection from his parents, who belonged to a church intolerant of gays.

Fortunately, the Shepard scholarship allowed Julius to take theater and dance classes in college and "find my dream." After graduation, Julius moved to Chicago and joined a theater troupe. A year later, he received a role with various touring Broadway musicals such as "Movin' Out" and "The Color Purple. Along the way, Julius says that he relied on caring individuals for support.

He credits Rich Eychaner, the openly gay Des Moines businessman whose foundation sponsors the Shepard scholarship, both for mentoring him professionally and for being a surrogate parent and confidante, reining him in when he was doing something ill-advised. "He keeps me going, focused and obtaining new goals. He's so successful," Julius says of Eychaner. "I want to be like him."

Last year, Julius' dreams were realized when he beat out 399 other actors for the part of Spider-Man on Broadway. And while Julius is enjoying this new superstar side of life, he remains grateful for his Iowa upbringing and education, and for the solid foundation his "birth parents" gave him by teaching him to respect others and himself. "I try not to be a diva but remain confident and humble," he says.

A sentiment that Peter Parker himself would surely echo.

You can also see Julius and the other "Spider-Men" show off their moves for the show's 2013 calendar HERE.