In the wake of the DOMA and Prop 8 decisions, gay families are becoming an increasingly popular topic of conversation. Recently, the children of gay parents have become their biggest advocates, and now, research is cranking up as well. A new study is helping to reinforce the legitimacy of same-sex parenthood. 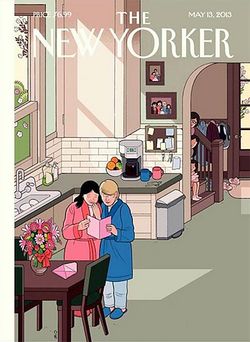 The study, conducted by researchers at the University of Massachusetts Amherst and University of Virginia, compared gay couples, lesbian couples, and heterosexual couples who had all adopted a child within the first few weeks of life after they’d been parenting for three years. It did observe differences in terms of how the couples divided labor: heterosexual couples assumed more traditional divisions of labor, with mothers doing more parenting work than fathers, while same-sex couples were more likely to equally share childcare tasks. This distinction, however, did not have any impact on children’s behavioral problems.

Though the division of labor was more even for same-sex couples, the most important parental attribute is, well, getting along.

…it was the parents who were most satisfied with their arrangements with each other who had children with fewer behavior problems, such as acting out or showing aggressive behavior. It appears that while children are not affected by how parents divide childcare tasks, it definitely does matter how harmonious the parents’ relationships are with each other.

A study released last week similarly found that when parents were better prepared for their adoption and had less symptoms of depression, their children fared better. These two studies join the many others that have found that sexual orientation does not have an impact on outcomes for children. Instead, it seems, good parenting is just good parenting.