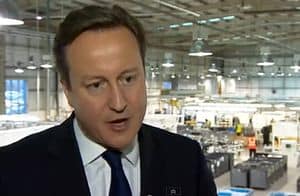 "I’ve told the Bill team I’m now going to reassign them because, of
course, all over the world people would have been watching this piece of
legislation and we’ve set something, I think, of an example of how to pass
good legislation in good time. Many other countries are going to want to copy this. And, as you know, I talk
about the global race, about how we’ve got to export more and sell more so
I’m going to export the bill team. I think they can be part of this global
race and take it around the world.”

Indeed, Cameron did pass legislation in the UK in good time, much sooner than 2015, the date by which he originally promised to pass make marriage equality a reality. Though the path to equality in Britain was far from smooth, it remains unclear how the Prime Minister plans to take any lessons learned in the UK and apply them internationally.

Previous Post: « New Series ‘Please Like Me’ Explores The Awkward Side Of Coming Out: VIDEO
Next Post: Senate Committee Advances Benefits Bill For Gay Troops And Their Spouses »