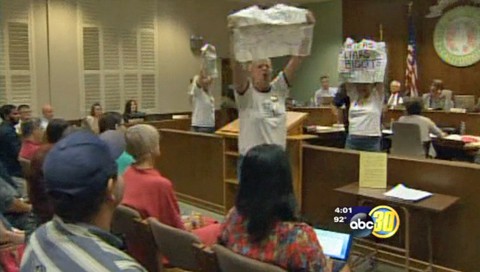 In 2009, Porterville, California's City Council faced outrage from some of the community after it passed a resolution publicly supporting Proposition 8.

On Tuesday night, the City Council voted 3-2 to resind the mayor's LGBT Pride proclamation, prompting a protest by three activists who stormed the chamber holding up signs reading "liars" and bigots". They were arrested.

City Councilmember Pete McCracken voted down taking back the proclamation because in the city's history. The mayor has always had a right to issue a proclamation without the council's approval. Three other councilmembers disagreed, voting to rescind the proclamation and instead issue a more broad resolution that did not specify the gay community. The outbursts by both sides even sent the mayor out of the room in tears.

Watch ABC30's report on the vote and arrests, AFTER THE JUMP…