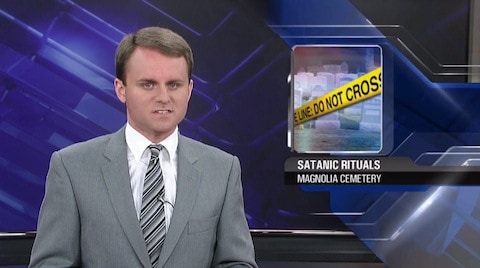 On July 14th the New York-based Satanic Temple held a "pink mass" ceremony over the Mississippi grave site of Catherine Idalette Johnston, the mother of notorious hate-monger Reverend Fred Phelps. The intent was to turn her "gay for all eternity" and was crafted in response to Westboro Baptist Church threatening to protest the funerals of the Boston Marathon bombing victims.

Bill Arlinghaus, the owner of the cemetery in Meridian, Mississippi, is now looking to press charges of tresspassing and the local police are preparing to arrest those involved as soon as possible. Captain Dean Harper of the Meridian Police Department said of the incident,

"It is an unusual crime that we haven't come across to my knowledge in awhile. Not only does it violate a state and city ordinance, but it also violates the moral decency of a human being."

The charges laid against the participants of pink mass include trespassing, indecent exposure, and malicious mischief. It will be interesting to see how any convictions play out since, even though the Satanic Temple admits that attention is what they were after, they were arguably practicing their religion. There is also a notable comparison between the pink mass "conversion" of the late Mrs. Johnston's sexuality and the Mormon church's practice of posthumous baptism and conversion of jews.