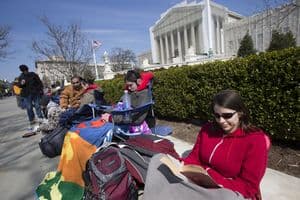 Almost one month after the Supreme Court's landmark decision to gut DOMA, legal analysts and experts are still trying to make sense as to how it specifically impacts same-sex couples and their benefits. While the decision was explicit in terms of including all "lawful marriages", the situation remains less-than-clear for those living in what legal scholars refer to as the 36 "mini-DOMA" states, according to an editorial released in yesterday's Washington Post.

According to Bloomberg, approximately one-third of the roughly 130,000 married same-sex couples live in such states that have laws in place forbidding the practice and/or recognition of same-sex marriage. As WaPo and SCOTUS Blog have already argued, this could certainly prove problematic for federal agencies wishing to determine which couples are "legally married". Do said agencies use the guidelines laid down by the state of the couple's residence, or the state that legally married them? WaPo has already pointed out that:

"Each agency has its regulations, and some define marriage based on where a couple resides rather than where the spouses were married — obviously inhospitable to same-sex couples living in the states that don’t recognize their marriages."

Thus, the absence of any centralized standard would likely make an already-tricky situation even more so. Luckily, President Obama has already expressed that, "it’s my personal belief, but I’m speaking now as a president not as a lawyer, that if you marry someone in Massachusetts and you move somewhere else, you’re still married." To that end, the Justice Department has updated the regulations for many federal agencies thusly, such as the Office of Personnel Management. For other agencies, however, such as the Internal Revenue Service, the situation remains far from certain. As WaPo has pointed out, changing guidelines for other agencies would require the approval of a gridlocked Congress. While it is possible for President Obama to sign an executive order instructing all agencies to follow suit with the Office of Personnel Management and the Pentagon, as Bloomberg explained, doing so would almost certainly trigger a backlash. "Careful consideration is important," they said, "especially with opponents of same-sex marriage already warning that they will sue if federal policies impose de facto same-sex marriage in states where voters have opposed it."

As a result, it would seem that, when it comes to enforcing the Supreme Court's ruling on DOMA, the situation is only truly clear in the 12 states that do allow marriage equality (as well as the District of Columbia). To borrow from The Washington Post's Editorial Board…

"For the sake of clarity and equality, lawmakers must help the administration harmonize standards across the government, recognizing the union of any couple legally married in any state, no matter where they now reside and no matter what piece of the federal government is looking."

Previous Post: « Satanic Group To Be Charged With Trespassing For Pink Mass Ritual
Next Post: One Direction Go Deep In Disguise, Make A Mess, Pimp Their Movie With ‘Best Song Ever’: VIDEO »