You may recall that Reverend Paul Scalia, the son of homophobic Supreme Court Justice Antonin Scalia, is a Catholic priest who served as Chaplain for Courage – a Catholic ex-gay group that encourages gays to practice lifelong celibacy and attend their "play the gay away" athletic camps.

Paul Scalia currently serves as Courage's Chairman of the Board of Directors and will speak this month at the organization's annual summit. The website touting the summit also links to a 2012 article written by Scalia in which he praises the writings of Courage founder Father John Harvey. 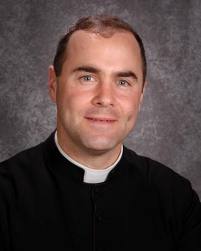 Scalia praises Harvey for no longer using the terms "homosexual" and "sexual orientation" because Scalia thinks that gay people are only straight people experiencing "same sex-attraction." For him, there is only one true sexual orientation — the one that leads to heterosexual marriage, and his article (excerpted below) reveals the intellectual rationalizations that allow ex-gay therapies to thrive in the secular world while remaining firmly rooted in fundamentalist homophobia:

In this regard we must note the unfortunate title The Homosexual Person (and therefore also the unfortunate title of the CDF document). In short, we should not predicate “homosexual” of any person. That does a disservice to the dignity of the human person by collapsing personhood into sexual inclinations. The chronology of the books helps us to see the development in this area of language. Indeed, the Church is still trying to find the right vocabulary to speak about this modern phenomenon. Thus in his last book, Father Harvey ceased using the term “homosexual” or “homosexual person.” His thought and ministry brought him to realize that it is better to speak of someone with “same-sex attractions.” Although lacking brevity and ease of speech, this phrase has the virtue of precision. It acknowledges both the person/attraction distinction and the complexity of the condition – not fairly summarized as an “orientation.” Which brings us to another matter of vocabulary.…

Father Harvey’s use of the term “orientation” also underwent a deserved change. In his first two books we find the use of this word to describe homosexual inclinations or attractions. In the last book, however, he deliberately avoids it. This reflects the increased appreciation for the fact that homosexual tendencies (to use a term from magisterial documents), do not constitute a fixed, unchangeable aspect of the person and therefore should not be considered an “orientation.” Further, the term does violence to a proper understanding of human sexuality. Either our sexuality is oriented in a certain direction (i.e. toward the one-flesh union of marriage), or it is not. We cannot speak of more than one sexual “orientation” any more than we can think of the sun rising in more than one place (i.e. the orient).

Indeed, one of Father Harvey’s contributions is his discussion of the possibility for healing of homosexual attractions. He deftly navigates the extremes (on one hand, that change is impossible… on the other hand, that it is morally obligatory) to present the simple truth that many have found freedom, to varying degrees, from homosexual attractions. Thus we cannot speak of it as a fixed, unchangeable, unchanging “orientation.”

Scalia has used such sophistry before to justify parental disapproval of gay kids and opposition to gay-straight alliances in public schools. For him, homosexuality is nothing more than an attraction, one that should be changed or suppressed for a lifetime to attain moral communion with a "love the sinner, hate the sin" kind of God.