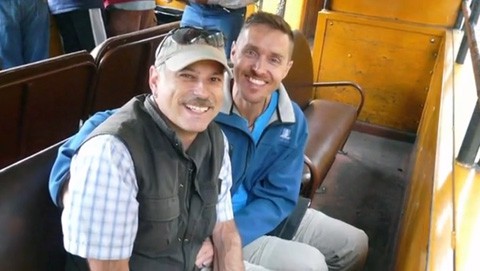 Ron McCoy and his partner, Chris Bowers, a gay couple who had just flown in from Portland, Oregon for Albuquerque, New Mexico's Pride Festival last month, received a horrible welcome to the city from a driver on an airport shuttle bus, KRQE reports:

McCoy said he and his partner sat in the front of a shuttle bus, holding hands when a driver discriminated against them.

“I saw him look at us, look down at his hands and he looked so angry,” McCoy said. “He just blurted out at me, he goes, “'Okay, if you're going to do that, you're going to the back of the bus.'"

Shocked and not wanting to cause problems, the couple obeyed. Once the shuttle stopped at its destination, however, the couple asked the driver why he forced them to move.

A woman, originally from Albuquerque, witnessed the confrontation and jumped in. “I told the bus driver that I was completely appalled that anybody would be treated this way,” said Bernadette Aguirre.

“And the driver looks back at us and goes, 'I'll show you what's appalling,' and he points to us,” McCoy said.

Watch KRQE's report, AFTER THE JUMP…

Gay couple forced to back of bus