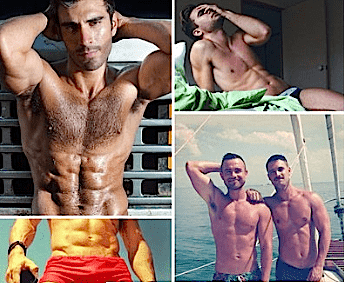 With apps like Instagram giving users the ability to crop and filter their photos to near-professional results, its no surprise that the social media site has quickly become a psedo-Vogue for the general public to flaunt their very own glamorous style and sex appeal.

And now there's a term for the gays taking full advantage of these social media platforms to harness their own eroticism: the #Instastuds. Mike Albo over at New York sums up how these guys are not your run-of-the-mill shirtless hotties, but rather something much more alluring and unobtainable:

The #Instastuds are different than your average hot selfie-taking guy or women on Instagram – the ones who will occasionally post a photo of a sunset, their cat, or a casual lingerie shot in their apartment. These men are more relentless and artful: They pose gorgeously in photo after photo, channeling their inner Steven Meisel, their images as well-selected, aspirational, and powerfully seductive as an underwear or fragrance ad campaign.

Flaunting themselves on Instagram, they are also all proudly and openly gay…But at the same time, they all look fairly heteronormative: hunky, sporty, the kind of guy who would call himself "masc & musc" in a hook-up app and would never take a photo of himself at Drag Brunch. And all are careful to avoid appearing like they are doing this just to get laid. By showing that, they would be revealing that they are vulnerable and have needs, and an #Instastud can never look unsatisfied with his life.

You can check out the full article and more photos of these self-published studs HERE.