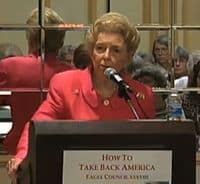 When asked if Kennedy's writing is really just an 'anti-Christian polemic disguised as a legal opinion,' Schlafly had this to say [via Right Wing Watch]:

"Well, I was extremely offended at all the nasty names he called us. I just think it's so inappropriate, unprecedented and really nasty for the justice to say that the reason DOMA, the Defense of Marriage Act, was passed, and those who stand up for traditional marriage is that they have animus against gays, they want to deny them equal dignity, that we want to brand them as unworthy, we want to humiliate their children, we have a hateful desire to harm a politically unpopular group. I just think, I feel personally insulted by what Justice Kennedy said. I don't think that's true, the idea that anybody who stood up for traditional marriage is guilty of all the hate in his heart is just outrageous."

In the past, Schlafly has made the claim that 'the main goal of the homosexuals is to silence any criticism. Most of them aren't interested in getting married.'