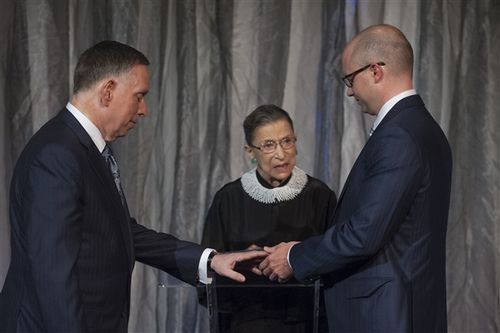 UPDATE: Here's the photo (above).

Ruth Bader Ginsburg today will be the first Supreme Court Justice to officiate at a same-sex wedding ceremony, the WaPo reports: 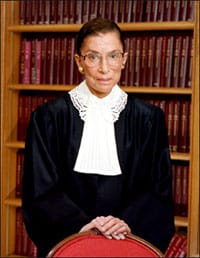 …she officiates at the Washington wedding of Kennedy Center President Michael M. Kaiser.

The gala wedding of Kaiser and economist John Roberts at the performing arts center brings together the nation’s highest court and the capital’s high society and will mark a new milepost in the recognition of same-sex unions….

…During a recent interview, Ginsburg seemed excited about being the first member of the court to conduct such a ceremony and said it was only a logical next step.

“I think it will be one more statement that people who love each other and want to live together should be able to enjoy the blessings and the strife in the marriage relationship,” Ginsburg said.

She added: “It won’t be long before there will be another” performed by a justice. Indeed, she has another planned for September.