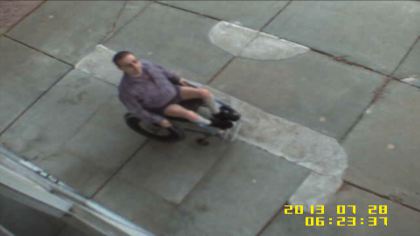 Lonny Lloyd Roseland has been arrested in Maple Grove, Minnesota for vandalizing the gay-friendly Pilgrims United Church of Christ four times since May, CBS Minneapolis reports:

Around June 2, eggs had been thrown at the building, and the words “Church of Sodom” and “Church of Gomorrah Lev 18:2″ were written on each side of the entrance to the church in black marker. The church pastor said the bible verses were meant to be against homosexuals.

Another bible verse was written on the church on June 8, and on June 30, “Gay Pride? No! Shameful Sodomites! Jude 7. Love cult! Matt 7:21-23″ was scrawled in black crayon on each side of the doorway. Handcuffs also locked the entry way door, and egg yolk was dripping on the entry way glass and sidewalk.

On July 26, authorities placed a camera on the outside of the church, and on July 28, the establishment was egged and vandalized again.

After examining videotape, police questioned Roseland, who is wheelchair-bound, about the incidents. Roseland confessed to the crimes. The station says he told police that “any church that recognizes gays can be married in the eyes of God is not a church but a cult" and that's why he did it.

Previous Post: « It’s Shark Week, Do You Know Where Your Cat Is? – VIDEO
Next Post: DOMA and Why Certain States Must Recognize Your Divorce But Not Your Same-Sex Marriage »