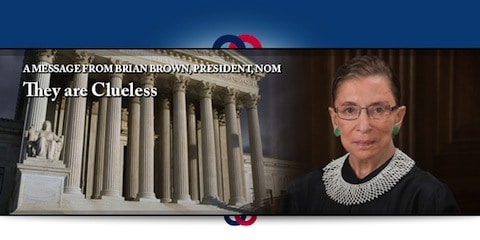 The National Organization for Marriage, in another bid to whip up financial support from their base and desperately attempt to remain relevant, sent out an email this past week slamming Supreme Court Justice Ruth Bader Ginsberg for her support of marriage equality and officiating a ceremony. In addition to calling her clueless about the true purpose of marriage – which is makin' babies, not "[O]ne more statement that people who love each other and want to live together should be able to enjoy the blessings and the strife in the marriage relationship." – Brian Brown tried the tactic of invoking idolatry and metaphorical child-sacrifice:

How many generations of children will be sacrificed to the gods of the gay lobby who demand the redefinition of marriage as an idol to their political movement?

What follows is the usual dross of falsehoods and deliberate misinterpretations of what marriage equality supporters actually believe: men and women aren't unique, children don't need a mom and a dad, it will lead to polyamory, etc., etc., ad nauseum. And, of course, the tired refrains of "Won't someone PLEASE think of the children?" As Alvin McEwen points out, however, concern for children is just the thin façade NOM hides behind:

Other than attempting to keep gays from getting married, what has NOM done for the issue of foster care and adoption? NOM seems to be more interested in keeping children away from good gay homes than making sure children are placed in homes period.