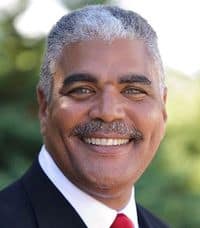 After nearly a decade of setbacks, the tiny British territory of Bermuda finally approved legislation this summer prohibiting discrimination on the basis of sexual orientation. But when asked last week by the Bermuda Sun about a potential push for legislation allowing same-sex marriages, Premier Craig Cannonier (pictured right) had the following to say:

"That was not on our agenda (for this legislative year) and for us, there has not been a lot of noise about moving in that direction.

"We certainly made our decisions when it came to the Human Rights Act (this summer). And I can certainly go back and say our previous administration (the previous Progressive Labour Party government) had been fumbling with this thing for six years-plus."

Despite the realization that marriage equality will not be coming to Bermuda this year, Mr. Cannonier remains proud of the progress his country has made regarding LGBT rights.

"It's a highlight for us within our first legislative agenda, (that) we were able to get the Human Rights Act moved through.

"There can be no prejudice towards one another. That was a ridiculous stance this country had, and I know that the rest of the world was looking at us and saying, 'When are we going to move forward?'