Back in September 2012 we posted about April DeBoer and Jayne Rowse, a Detroit couple suing the state of Michigan over its ban on gay adoption, who expanded their lawsuit to take on the state's marriage amendment. In March Federal Judge Bernard Friedman stayed his decision in the matter until after the Supreme Court ruling on DOMA. Then in July he said the couple could proceed with their case. 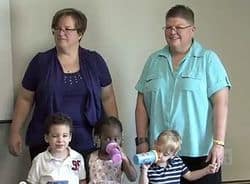 This Wednesday, Friedman is set to issue a ruling which could make same-sex marriage legal in Michigan, the Detroit Free Press reports:

U.S. District Judge Bernard Friedman is expected to issue a ruling, perhaps that afternoon, on whether Michigan’s 2004 ban on same-sex marriage violates the U.S. Constitution. He also may decide whether the state’s ban on same-sex adoption should be tossed.

Dozens, and perhaps hundreds, of same-sex couples are preparing to tie the knot Wednesday afternoon, according to organizers in the gay and lesbian communities.

Ingham and Washtenaw counties are among those offering to waive waiting times for marriage licenses, and 44 clergy members statewide will be on call to perform ceremonies, according to Randy Block of the Michigan Unitarian Universalist Social Justice Network, who has compiled a list of available county clerks and clergy.